LSU looks for more consistency in battle with New Mexico 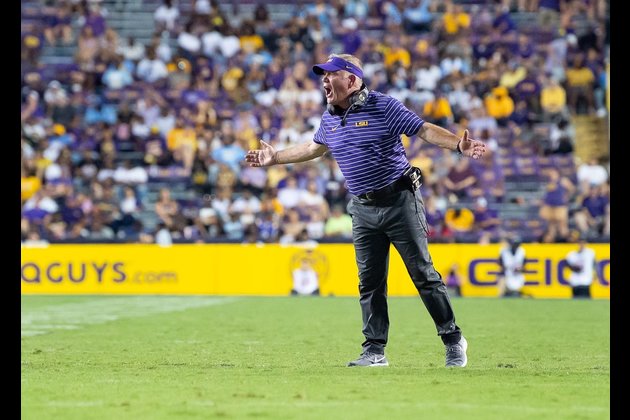 Brian Kelly got a victory in his first Southeastern Conference game as LSU head coach.

The Tigers (2-1) will try to build on their 31-16 victory against Mississippi State last weekend when they step out of the SEC to face New Mexico on Saturday in Baton Rouge, La.

"Can we handle success? That's the question this week," Kelly said. "Any win in the SEC is a good win. We're at a team that has a chance to be a good team, but we have to have consistency."

LSU struggled offensively as it fell behind the Bulldogs 13-0 late in the second quarter. A touchdown just before halftime jumpstarted the offense and the Tigers pulled away by outscoring MSU 21-0 in the fourth quarter.

"I really like how physically and mentally our guys stayed with it until the end of the game," Kelly said. "We have to look toward perseverance and consistency.

"We'll look to improve on our overall performance and consistency for four quarters. We're looking for a complete performance."

"We do some turnovers stuff during fall camp but that's not where you get turnovers," Lobos head coach Danny Gonzales said. "Turnovers you get from effort and being really physical. The (turnovers) you cause come from the way we play and what we preach on defense is all 11 to the ball in bad humor and when you get there you try to cause something."

The turnovers came in the form of three fumble recoveries and four interceptions, including one that was returned for a touchdown by linebacker Reco Hannah to give the Lobos a 10-0 lead.

New Mexico, which beat Maine 41-0 and lost to Boise State 31-14 in its first two games, will be playing its first road game.