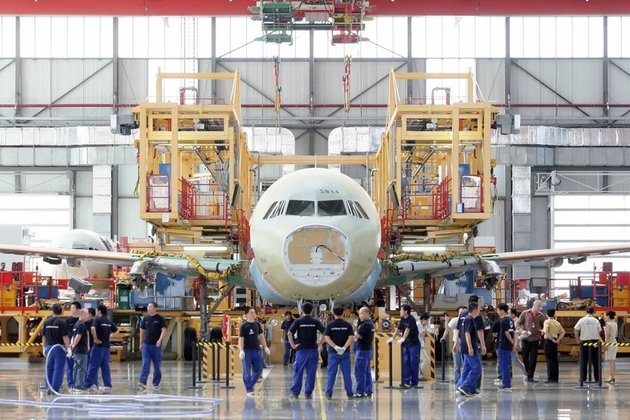 A disruption of titanium exports could spell trouble for plane manufacturers

Europe's aerospace industry would be in danger if sanctions disrupt the supply of Russian titanium, the Wall Street Journal reported on Friday, citing the top management of Airbus.

Russia's VSMPO-Avisma is the world's largest supplier of the metal and was the main trading partner for the US-based Boeing and Europe's Airbus.

While Boeing halted purchases of Russian titanium from VSMPO, Airbus has continued buying it through unsanctioned entities and has lobbied to keep the firm off the sanctions list.

"The ones we would sanction would be ourselves. If they [VSMPO] stop delivering to worldwide global aerospace, it's the end of the story. So it's a typical lose-lose," the WSJ quoted Airbus CEO Guillaume Faury as saying.

VSMPO meets about half of Airbus' titanium needs. The metal is widely used in plane making because it is light, strong, and resistant to corrosion.

Before the sanctions, Boeing received about a third of its titanium from Russia. Apart from Japan, US allies don't produce aircraft-quality metal. The Department of Commerce has repeatedly described the current situation as a threat to national security.

After the start of Moscow's military operation in Ukraine, plane manufacturers said they were looking for alternative sources of titanium, but according to the WSJ, this diversification did not happen.