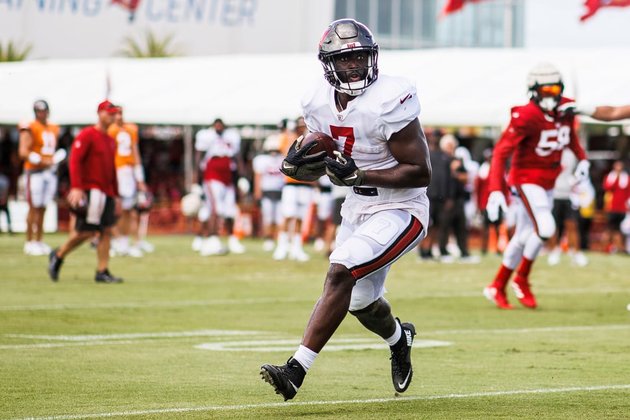 Tampa Bay BuccaneersIn his first two seasons with the Buccaneers, Leonard Fournette has developed into a trustworthy back who provides value on any down and in any game situation, and that remains true in 2022Scott Smith

When the Tampa Bay Buccaneers traded out of the first round of the 2022 NFL Draft and into the top of the second, they used their two picks in that round on defensive lineman Logan Hall and guard Luke Goedeke. The team had a clear need for some youth and talent on the defensive front with Ndamukong Suh and Steve McLendon no longer on the roster, so the Hall pick surprised no one. Similarly, with their two starting guards from 2021 either playing in Cincinnati or not playing at all, it was a logical move to hit that position with an early pick.

With their next pick, in the third round, the Buccaneers selected Arizona State running back Rachaad White. By the same logic, the allocation of a Day Two pick to that position indicated that Buccaneer decision-makers thought their offensive backfield was in need of another contributor, particularly one who could catch a lot of passes.

The team was in the same position two years earlier, looking for a complement to Ronald Jones and taking Vanderbilt's Ke'Shawn Vaughn in the third round. As it turned out, however, Leonard Fournette became available a few months later; he signed with the Bucs and was the primary backup to Jones for most of 2020. Fournette then took over as the starter late in that season, made a star turn in the Super Bowl run and backed it all up with a very productive 2021 campaign. Jones subsequently left for Kansas City in free agency.

White averaged 6.3 yards per carry over 15 total games at ASU, but the Buccaneers were equally impressed with his route-running, hands and open-field explosiveness. They touted his advanced work in the passing game on the very night they drafted him, and White has looked every bit the part during the first half-dozen practices of training camp. If his pass protection proves trustworthy, he could carve out a significant role on third down.

And yet none of that changes the fact that Fournette is the Bucs' workhorse back and a player they can leave in on all three downs. In 2021, Jones didn't play much on third downs due to concerns about his pass blocking and veteran newcomer Giovani Bernard, one of the NFL's top pass-catching backs of the past decade, had some injury issues and finished with just 146 offensive snaps and 23 catches. That was fine, however, because the Bucs had no qualms about leaving Fournette in for any down or situation.

After the Bucs' practice on Tuesday, Head Coach Todd Bowles made it clear that the Bucs still feel that way about Fournette, and that has been the best part of his evolution as a Buccaneer over two years.

"[It's] just his endurance, being an every-down back," said Bowles. "He's a three-down back. Before he was a two-down back; he's become a three-down back. He was a great pass-catcher when he came out of college, he just didn't get the volume. So now you're seeing the volume of that and his versatile game. You can't just crowd the box because he can catch the ball. I think that's where his game grew."

This is not a completely new reality for the former LSU star. After being chosen fourth overall in the 2017 draft by Jacksonville, Fournette recorded just 74 targets and 58 receptions over his first two NFL seasons. The Jaguars had other backs they liked to throw to while Fournette was operating as the rugged ballcarrier in a run-first offense. In 2019, however, Fournette had the backfield almost totally to himself and he suddenly got 100 targets in the passing game, finishing with 76 catches. Bowles surely wasn't surprised, just as he wasn't surprised when Fournette was leading all NFL running backs with 69 catches at the time he suffered an ankle injury in Week 15 and landed on injured reserve.

"I watched him coming out and I've seen him," said Bowles. "He's light of foot no matter how big he is. But he understands the passing game and he can run away from you."

It's obvious that Fournette has gained the trust of Tom Brady in the passing game; the two have spoken of a connection between them that allows for some adjustments on the fly on certain plays, with both players on the same page. That, too, has been part of Fournette's development over his two seasons as a Buccaneer.

"Definitely coming from Jacksonville we were a running team and we had guys like T.J. Yeldon and Chris Ivory who did third down, which I really didn't have to do, coming in as a rookie and things like that," he said. "But just [my] development as a three-down overall back, it's been great. I had my ups and downs with a lot of the blitz pick-ups and catching the ball, stuff like that, but I've gotten better over the course. I know more. I'm still learning and still growing."

The Buccaneers also don't need to worry about Fournette not being ready for the workload of a three-down back at the start of the season. There were some outside concerns about Fournette's readiness when he reported to minicamp in June larger than his normal playing weight. But he said at the time he would be in shape for training camp, and he was true to his word. It's something he's grown accustomed to doing.

"Any coach that I've had, in the offseason I always blow up, I always get big," said Fournette. "I'm sorry, but I've got big genes. My mother's big, my father's big. But just coming into camp I know I had a goal to reach. Like I told Shaq, 'I'm going to come back in shape, come back better and let the noise be outside noise.' I worked my tail off every day."

Fournette is going to continue to get plenty of work. After reluctantly playing two consecutive seasons on one-year deals, he got the longer-term contract he was seeking from the Buccaneers this offseason. That obviously suggests a commitment from the team to keep him in a featured role, and that will still include some third-down work even if White proves to be helpful as a rookie. No matter what percentage of the third-down snaps he gets, Fournette remains a three-down back, and the Bucs know it.