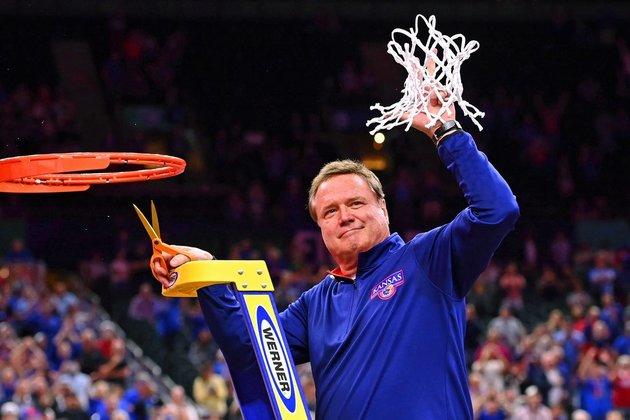 A meeting between basketball blue bloods Kansas and Kentucky will highlight the 2023 SEC/Big 12 Basketball Challenge.

The lineup was announced Thursday for the slate of games, which is set for Jan. 28.

Other games on the docket are Alabama at Oklahoma, Arkansas at Baylor, Auburn at West Virginia, Florida at Kansas State, Iowa State at Missouri, Ole Miss at Oklahoma State, Texas at Tennessee, Texas Tech at LSU and TCU at Mississippi State.

Kansas and Kentucky will square off at Rupp Arena in Lexington, Ky.

It will be the fifth time the teams have met in the challenge, with both teams having won twice.

Kentucky has plenty of motivation to win in January. During the NCAA Tournament -- which Kansas won and in which Kentucky made a first-round exit in a loss to St. Peter's -- the Jayhawks overtook the Wildcats as the all-time leader in wins in Division I men's basketball.

Head to head, Kansas has won four of the past six games between the teams and is 7-5 against the Wildcats in the Bill Self era.

WASHINGTON D.C.: Due to the record high trade deficit and a resurgence in COVID-19 infections that curbed spending on services, ...

TAIPEI, Taiwan: The world's fourth largest chip designer by revenue, Taiwan's MediaTek, has told Reuters that it plans to create ...

GENEVA, Switzerland: Swiss pharmaceutical group Novartis has said, as part of its previously announced restructuring program, that it could cut ...

SYDNEY, NSW, Australia - Stocks in Asia skidded lower Friday with all the major indices recording solid losses."Capitulation is the ...

DUBAI, UAE: The Arab states have built significant amounts of solar and wind power installations, and are in line to ...

ASSAM, India: During this week's heavy rains, which caused the region's worst floods in years, staff at the Cachar Cancer ...

KAREN STATE, Myanmar - Over the past three days, an army outpost meters away from Myanmar's border with Thailand has ...

Unable to staff airports, Germany to bring in foreign workers

BERLIN, Germany: A German Interior Ministry spokesperson has said that in a bid to relieve airports overwhelmed by staff shortages ...

WATFORD, UK: Watford F.C. has cancelled a friendly match against the Qatar national team due to the Gulf country's human ...

JAKARTA, Indonesia: Indonesian President Joko Widodo has said that he will urge his Russian and Ukrainian counterparts to open peace ...