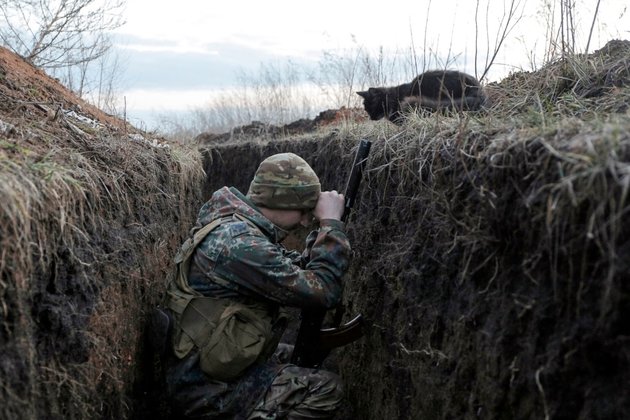 With Russian troops massing and the specter of war looming over the trenches of eastern Ukraine, soldiers in the dugouts have found solace in the unlikely companionship of stray cats and dogs.

In a muddy and freezing trench near the town of Avdiivka, 21-year-old Ukrainian soldier Mykyta was petting a dog adopted by the troops as he explained how she had become a valued asset on the frontline.

'She immediately barks or growls if the enemy is planning an attack. It's safer and calmer with her - no wonder they say that a dog is man's best friend,' he told AFP, declining to give his last name over security concerns.

More than two million Ukrainians were displaced from their homes and many pets were abandoned after fighting broke out in 2014 between pro-Moscow separatists and Kyiv's army. 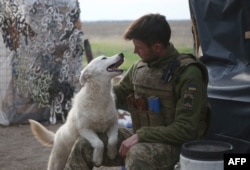 FILE - A Ukrainian serviceman pets a stray dog on the front line with Russia-backed separatists near town of Krasnogorivka, Donetsk region, April 23, 2021.

The conflict, which has claimed 13,000 lives, has simmered in recent years with only sporadic reports of escalations and military deaths in eastern Ukraine.

But that has changed recently with Kyiv's Western allies accusing Russia of building up tens of thousands of troops around Ukraine's borders in preparation for a possible invasion.

Those tensions are at the center of intensive negotiations this week between the United States, NATO and Russia in Geneva and Brussels, with both sides accusing the other of ratcheting up tensions.

'The animals aren't to blame - the war is,' said 49-year-old soldier Volodymyr, who also declined to give his last name citing security concerns.

An AFP journalist said around 15 cats and several dogs had taken up residence together with the soldiers in Volodymyr's section of the trenches.

'They were abandoned. They had to fend for themselves. We have to feed them,' Volodymyr said, pouring leftover soup for the cats.

After spending months on the frontline with their adopted strays, some soldiers have ended up taking their new comrades home, away from the fighting.

In the basement of a bombed-damaged house where he sleeps while at the front, 29-year-old soldier Dmytro, meanwhile, is full of praise for his black hunting cat, Chernukha.

'When winter came, field mice were running around the dugouts,' Dmytro said.

'She caught them all,' within two months, the young soldier with a shaved head told AFP proudly.

But it wasn't the first time a pet had intervened during the war, he said. 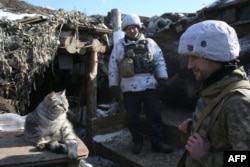 FILE - Ukrainian servicemen look at a cat, on the front line with Russia-backed separatists in Donetsk region, Feb. 16, 2021.

Dmytro told AFP that in 2014 he befriended a one-month-old puppy near the then-flashpoint town of Slavyansk. He said the dog soon became a 'mini-talisman' among his fellow soldiers.

Minutes before one bout of shelling began, he remembered, the dog hid. 'We very quickly took the same measure as the dog,' Dmytro said with a smile on his face.

With tensions higher now over fears Russia could invade, soldiers say the animals have been a particular boon, helping them relax and bringing respite to their daily routine.

'You come back to the post, lie down on the bed, and here comes Chernukha,' Dmytro said.

The cat 'lies on your stomach and looks at you as if she wants to be petted.'