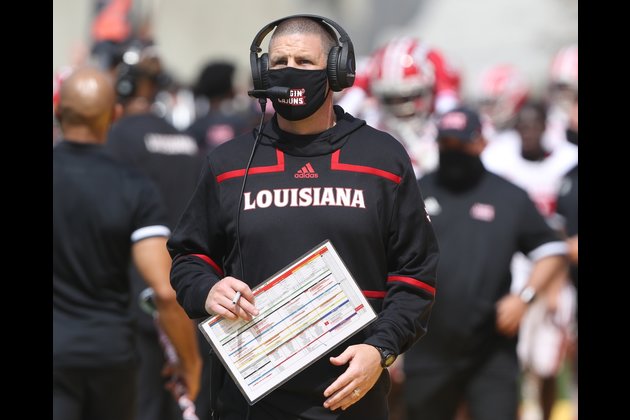 No. 23 Louisiana had to prepare for this Saturday's Sun Belt Conference game at in-state rival Louisiana-Monroe without head coach Billy Napier.

Napier -- as well as multiple players on his team -- tested positive for COVID-19, causing last weekend's non-conference game against Central Arkansas to be canceled. The school announced 33 players were in the coronavirus protocol, which means they were either recovering from the virus, had tested positive or were in quarantine as a result of contact tracing.

"You know, I had really one rough day there - day-and-a-half, or so - where the symptoms were pretty tough," Napier said. "But overall I think I'm on the way out of it.

"The tough thing here is we don't get to go to practice, and (I'm) not going to have an opportunity to spend time with the family for Thanksgiving."

Napier is scheduled to complete his 10-day quarantine Friday and said he plans to drive to Monroe separately from the team and join the Ragin' Cajuns (7-1, 5-1 Sun Belt) at the stadium.

"I wish I could be with them during the week and all that getting ready, but, I mean, it's just not happening," said Napier. "It's fortunate that it worked out to where I can be there Saturday."

The Ragin' Cajuns won four games in a row and clinched their third consecutive West Division title with a 38-10 victory against visiting South Alabama on Nov. 14 before last week's cancelation. Quarterback Levi Lewis completed 21 of 31 passes for 252 yards and a season-high three touchdowns and was named the conference's Player of the Week. Lewis has thrown for a league-leading 1,880 yards and 13 touchdowns this season.

"It's devastating we couldn't play, because ... at the end of the day, each game counts to us," safety Kam Pedescleaux said.

Added offensive tackle Max Mitchell: "I feel like we were hitting our stride there, and I feel like this past week we could have really ... carried on what we did the week before last and hopefully let some the younger guys play."

The Warhawks returned to the practice field last Saturday.

"We got back going a little bit Saturday and again (Sunday)," Warhawks coach Matt Viator said, "trying to get everybody back in a football rhythm, so to speak, and try to get on a normal week."

The Warhawks have yet to hold a lead this season. They've been outscored 302-128 this season.

"It's frustrating," Viator said. "I think we continue to play really hard, compete really hard. It's just not happening for us."

Quarterback Jeremy Hunt relieved ailing starter Colby Suits and completed 26 of 39 passes for 339 yards and three touchdowns against Georgia State. Suits since has announced he's opting out of the rest of the season and entering the NCAA transfer portal.

Louisiana won six of the past eight meetings in this season after the Ragin' Cajuns eked out a 31-30 victory last season.