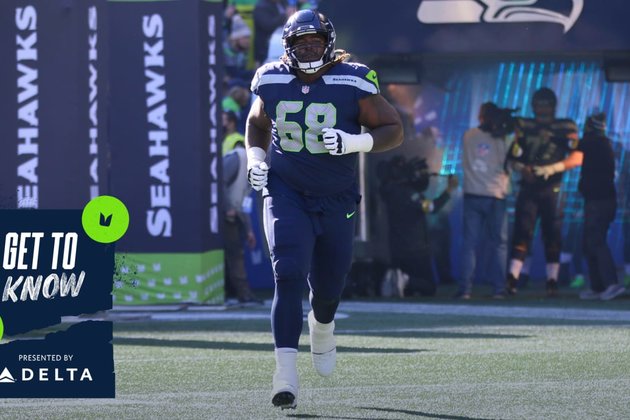 To help 12s learn more about some of their favorite Seahawk players, we caught up with Seahawks guard Damien Lewis and asked him 12 questions. Check out his answers below. 'Get to Know the Seahawks' is presented by Delta. Ryan Johnston

His mentality matches his play style.

He went from a community college in Mississippi to the NFL, and he's got advice for others doing the same.

"Focus on the small things. Don't let the small things mislead you. Take those things because that's what's going to help, it's going to be a big factor in your life. Let's say someone's late. You don't want to be late, it's a whole different league. You want to be early to everything, hand placement, you want to do everything right. Pay attention to the details. Somebody who's trying to take a step forward pays a lot of attention to details."

On gameday, he speaks with his preacher.

"I'm really heavy on the Bible. So, before a game I come in, I get in the hot tub and cold tub, contrasting there a little bit. Then I come out, I pick my phone up, call my preacher and we get a Bible prayer in. Then, it's up from there. I've known him ever since I was 11 years old, middle school. We've just had a good relationship ever since then."

The best way to enjoy the offseason is through his love of pizza.

"In the offseason I've got to train, and I've got to go get me some good pizza. I don't eat too much pizza, or at all, during the season. So, I've got to go find a place, and get me some good pizza in the offseason. We do the homemade pizza. We get the flour, put all the dough together, get some sausage and pepperoni, and tomato sauce. We rub it in, put it in, and it's really good. Then I go hit a Pizza Hut, Mario's, CiCi's, all my favorite spots. I'm going to say my pizza is the best. My homemade pizza first, then I give it to CiCi's, then Pizza Hut."

One of his biggest football moments was from elementary school.

"My first start in elementary, it was a big flag game. I was playing quarterback at the time so I was kind of small. It was a big game against a team called the Giants and we were undefeated, playing for the little league state championship. So, I went out there and put on a show in front of a big crowd and we won. That was a big moment for me, my family, my mom, and three brothers. At the time, I only had one younger brother and he was there watching and cheering me on. So, it was a big moment for me. Just going out there, and balling."

His hidden talent stems from gymnastics.

"I can front flip and back flip. Yeah, I was in gymnastics. In fact, I can hit one right now."

Giving back to the 12s fuels his passion for the game.

"Got to keep a smile. Make sure you smile to everyone, ask questions, and just engage with the fans and people in the community. Have a nice hand, have fun out there while you're doing it because this is why we play the game; to give back to the community."

His fictional representation is Shrek.

"Shrek. You've watched Shrek? Yeah, the big Ogre? People are always saying that, 'Man, you look like a big old green ogre.' I was wearing this big green thing for Halloween that I put on and people were roasting me."

It's tradition to grill on the Fourth of July.

"We do the Fourth of July. We get together for the Fourth of July, my family comes, we shoot fireworks, and we barbeque. I'm a big fan of barbequing, so I've got my own grill, and I would do a little smoker or something. My favorite thing to smoke, you've got to do the ribs and a cobbler. That's me right there."

His expectations for this season are high.

"I'm coming out here and being the better version of me. All of the little things that I made a mistake on last year, fixing old things, bringing more, and trying to touch the ceiling."

Coaching, knowledge and mentorship are invaluable.

"I think that LSU did a great job with me. They prepared me for the league. I learned a lot over there with the old coaches, under coach O (Ed Orgeron), and it just transferred over. The transition was really kind of easy. Coming in, learning the playbook, and being around great guys, Duane (Brown), Mike (Iupati), Ethan (Pocic), those guys mentoring me. I took a lot of information in, and I brought it to the field. Watching Mike, Ethan, watching how Duane approaches the game, I pick those things up and I put them in my game."

Playing on an empty stomach leads to a better performance.

"I don't really eat for pregame. I think when I eat it sits on me and I'll throw it up on the field. So, I try not to eat that much during pregame. I eat a big breakfast. I get eggs, bacon, pork sausage, hashbrowns or some rice, and go to work. But I'm not a big pregame meal dude. After the game, I'll throw down."