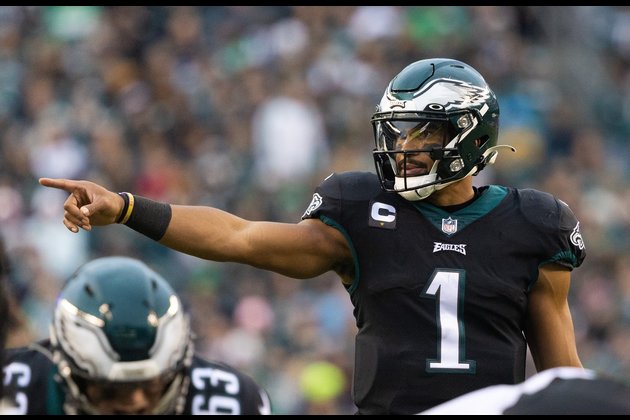 When the Philadelphia Eagles dropped a heartbreaking home game to the Los Angeles Chargers on Nov. 7, reaching the playoffs seemed bleak.

Fast forward a few weeks and the Eagles are in the thick of the NFC playoff race following victories over the Denver Broncos and New Orleans Saints.

If theEagles (5-6) can defeat the host New York Giants (3-7) on Sunday, they'll be surging in a positive direction with a favorable schedule looming.

Nothing is guaranteed, however, especially against an NFC East rival.

"That's what we talked about today at our team meeting -- blocking out the noise," Eagles safety Rodney McLeod said. "It was the noise that we heard when people didn't give us a chance and now it's the same the past few games when we've had success. We just have to be consistent and if we do that, we'll be fine."

The Eagles will be without linebacker Davion Taylor, who was placed on injured reserve with a knee injury. It looks as if Darius Slay will be available after being in concussion protocol since last Sunday.

Philadelphia's defense will be in for a different challenge since the Giants fired offensive coordinator Jason Garrett and replaced him with former Cleveland Browns coach Freddie Kitchens.

"Yeah, you gotta go back and you gotta look at some things that coach Kitchens did at Cleveland and some of those things like that," Eagles coach Nick Sirianni said. "You look for every advantage, every edge, tendency things. You go back and look at what they have. I've said this before here, it's a different play caller so there's going to be different looks, there's going to be different things that he does that coach Garrett didn't do or vice versa. We just have to be ready for anything."

The Giants will look to rebound after a 30-10 road loss to the Tampa Bay Buccaneers last Monday.

New York's offensive struggles continued as it remains the last team in the league to score at least 30 points in a game this season. That's likely a large reason why Garrett was replaced with Kitchens.

"In terms of Freddie, the lens he looks at it with is through the lens of the players," Giants coach Joe Judge said. "I think that's important when you talk about distributing the ball around the team. You gotta make sure you present opportunities for guys to make plays."

But Judge wouldn't confirm whether Kitchens would be calling plays.

While Eagles quarterback Jalen Hurts has developed into a marquee starter, the opposite has occurred for the Giants' Daniel Jones.

Jones completed 23 of 38 passes for 167 yards and a touchdown with two interceptions against Tampa Bay.

"It's on all of us to perform better at each of our jobs," Jones said. "We all have to play better and produce better."

The Giants have been banged up as key players such as wide receiver Kadarius Toney (quad) and tight end Kyle Rudolph (ankle) sat out of practice. Running back Saquon Barkley (ankle) remains limited.

Vonage sells to Ericsson for $6.2 billon in merger of tech giants

DUBAI, UAE: Israel and Jordan have signed what is being labeled a most significant cooperation agreement to construct a major ...

To improve supplies, Samsung to build chip factory in Texas

SAN JOSE, California: Samsung Electronics will build a $17 billion semiconductor chip factory in Texas, in a bid to increase ...

KABUL, Afghanistan: Under new rules imposed by the Taliban government, women have been banned from appearing on television dramas in ...

MAGWAY, Myanmar - Following an escalating conflict between the Myanmar military and the local People's Defence Force (PDF) in the ...

Health ministry has no record of people who missed second doses

KATHMANDU, Nepal - Around ten percent of residents of Kathmandu who received the first dose of AstraZeneca or Vero Cell ...

VILNIUS, Lithuania: China has downgraded its diplomatic ties with Lithuania from ambassador to charge d'affaires level, in retaliation for Lithuania ...