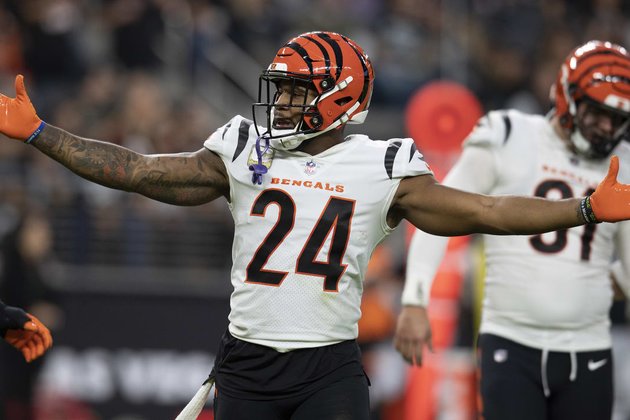 Television: The game will air nationally on CBS-TV. In the Bengals' home region, it will be carried by WKRC-TV (Ch. 12) in Cincinnati, WHIO-TV (Ch. 7) in Dayton and on WKYT-TV (Ch. 27) in Lexington. Broadcasters are Kevin Harlan (play-by-play), Trent Green (analyst) and Melanie Collins (sideline reporter).

Setting the scene: The Bengals return home this week to face the division-rival Pittsburgh Steelers on Sunday at Paul Brown Stadium. It is the first of three straight home games for the Bengals, and kicks off a stretch of five home games over the final seven weeks of the season.

The Bengals will be looking to ride the momentum of a convincing 32-13 road win over the Las Vegas Raiders last week, which stopped Cincinnati's two-game losing streak. If the playoffs were to start this weekend, the Bengals would be the No. 5 seed in the AFC.

"This wasn't so much about the playoff race for me," said Bengals QB Joe Burrow after the game. "We had that losing feeling the last two weeks that we played. It's more about just getting that momentum back. We needed momentum going into a big division game this week, and to get back to feeling how we felt before."

The story of the day for the Bengals was the play of their defense, which held the eighth-ranked Raiders offense to just 278 total yards, more than 100 yards under their season average entering the game (383.9). Cincinnati was particularly strong on third downs, allowing Las Vegas just one conversion in seven attempts.

"Our defense played well," Taylor said. "You could feel the confidence from them. They were great on third down and kept getting the ball back for our offense, which allowed us to keep pounding with the running game as much as we could."

The defense's presence was felt almost immediately. On the first possession of the game, Las Vegas recovered a fumble by Bengals QB Joe Burrow and returned it all the way to Cincinnati's nine-yard line. The Raiders, though, went three-and-out and settled for a FG.

"That was big time," Taylor said of the stop. "But you also have to give Tee Higgins credit there for making the tackle after the fumble, otherwise that's an easy seven points for them. And then the defense stepped up and held them. That's a four-point difference."

Offensively, Cincinnati struggled early before hitting their stride late in the second half. The Bengals led 16-6 early in the fourth quarter, before the Raiders' offense came to life and cut Cincinnati's lead to three with a three-play, 75-yard TD drive. With momentum on the Raiders' side and the home crowd energized, the Bengals responded with an emphatic and dominant 12-play, 62-yard drive that ate 6:39 off the clock and ended with a six-yard TD pass from Burrow to rookie WR Ja'Marr Chase on third-and-goal.

The Bengals' defense responded in kind by forcing turnovers on the next two possessions, which set up a touchdown from Mixon and field goal from K Evan McPherson to seal the win. Mixon carried 30 times for 123 yards and two TDs on the day, good for his third-straight multi-TD game, fourth straight game with a rushing TD, and seventh straight game with at least one TD.

McPherson, a rookie fifth-round pick, made four field goals on the afternoon, including an NFL-record tying three from 50-plus (54, 53 and 51).

This week, the Bengals welcome the Steelers for a critical matchup in the tight race for the AFC North. Pittsburgh enters the matchup 5-4-1, after losing 41-37 at the L.A. Chargers on Sunday night.

"We needed this win (at Las Vegas), but now we have to move on and get ready for a big divisional game against Pittsburgh," Taylor said. "We'll get to work this week and correct some things, and then come out ready to go on Sunday."

The series: The Steelers lead 67-37 overall and 32-20 in Cincinnati. The series includes two postseason games, both Steelers wins in Wild Card round contests at Paul Brown Stadium, after the 2005 and '15 seasons.

The Bengals have played more games against the Steelers (104) than any other foe. Cleveland is second in that category at 96, and Tennessee (formerly Houston Oilers) is third at 76.

"The 'middle eight' minutes of the game are so important to the overall outcome," Brady said earlier this year on ESPN's Monday Night Football broadcast with Peyton and Eli Manning. "Who wins the end of the first half and then the start of the third quarter? A lot of times when you defer and you get the ball on offense (to start the second half), you can create a 14-point swing without them ever touching the ball if you score before the half and then you score coming out in the third quarter. You definitely don't want to give the ball back to your opponents (at the end of the half). We always call it "the last shot" in basketball - you don't want to come down and throw up a three-pointer with 18 seconds left on the shot clock."

So how do the Bengals stack up with the rest of the league during the "middle eight?" They're among the best in the NFL this season, and their plus-26 point differential equates to a 2.6-point per game edge in that time period.

Burrow surpasses 5K: Bengals QB Joe Burrow surpassed 5000 career passing yards in Game 9 vs. Cleveland this season, in what was just his 19th career game. That made him only the sixth player ever to reach that mark in as few games. Only Patrick Mahomes (16 games) and Justin Herbert (17) reached it quicker. Andrew Luck, Kurt Warner and Marc Bulger also took 19 games to hit the mark.

In Bengals history, Jeff Blake, Andy Dalton and Carson Palmer were previously the quickest to 5000 yards, but it took them 22 games each.

Earlier this season, Burrow surpassed 4000 passing yards in just his 16th game. That was two games quicker than Blake and Palmer (18) for fastest by a Bengal.

So far this season, Burrow and Chase have connected on 47 passes for 867 yards (18.4 average) and eight TDs.

D tough after turnovers: The Bengals' offense this season has committed 14 turnovers, including two pick-sixes. But in the 12 instances where the opposing offense took over possession, the Bengals' defense has stood strong, allowing just one TD and six FGs (26 points). That means opponents failed to manage points on five of those possessions - one punt, one missed FG, a turnover on downs and two INTs.

Opposing offenses have taken over in plus territory after Bengals turnovers on nine occasions this year. Those have resulted in one TD, five FGs, a punt, a missed FG and an INT (23 points).

When opposing offenses take over inside the Bengals' 20-yard line, they have one TD, three FGs and missed a FG (17 points).

Pittsburgh's T.J. Watt has the second-longest active streak, at four straight games with a sack. Cleveland's Myles Garrett had his league-best streak of six snapped in the Browns' win over Detroit last week. Hendrickson has 9.5 sacks this season (ninth in the NFL), and has recorded a sack in eight of Cincinnati's 10 contests.