Indiana aims to clean up loose ends vs. Jackson State 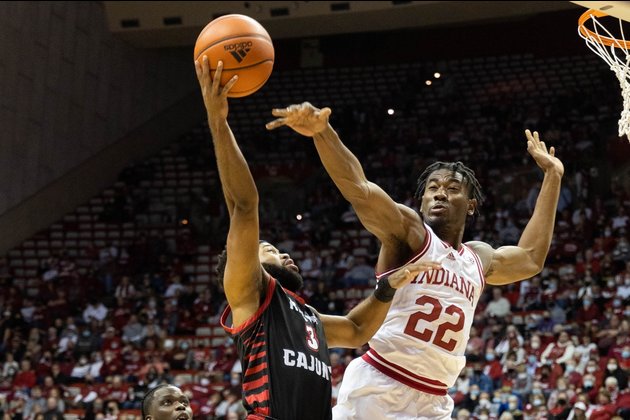 Indiana's goal will be to play more under control on offense when it hosts Jackson State on Tuesday night in Bloomington, Ind.

The Hoosiers (4-0) turned the ball over 27 times during their 76-44 win over Louisiana on Sunday night.

"At the end of the day, this is something we haven't been accustomed to doing and I'm a little disappointed about that," Indiana coach Mike Woodson said. "I think our point guards had eight between them."

Indiana still won by 32 points over Louisiana because of a suffocating defensive effort, holding the Rajun Cajuns to just 14 points in the first half and 19.2 percent shooting for the game.

Through four games, Indiana is holding teams to 57.3 points per game and 30.3 percent shooting from the floor.

"I've got to give the players all the credit," Woodson said. "They were paying attention to details, especially when we're game-prepping for our opponents and they're going out and executing, so it's kind of nice to see from a coaching standpoint."

"Our guys competed at a high level for 35 minutes," Tigers head coach Wayne Brent said. "We were down 65-61 with about five or six minutes (remaining); we just didn't finish the last five minutes of the game, but we were right there."

Trayce Jackson-Davis has posted double-doubles in two of Indiana's first four games. He is leading the Hoosiers in scoring (17.3 points per game) and rebounding (9.5).

Jackson-Davis and forward Race Thompson give Indiana two capable inside players who are athletic enough to switch on defense.

"Our pick-and-roll defense has been pretty good because our bigs are active and able to be up, and we are demanding our guards get into the ball and take onus on guarding the ball," Woodson said. "It kind of goes hand in hand."

WASHINGTON D.C.: To encourage a drop in sky-high gasoline prices, President Biden said the Department of Energy will release 50 ...

Vonage sells to Ericsson for $6.2 billon in merger of tech giants

DUBAI, UAE: Israel and Jordan have signed what is being labeled a most significant cooperation agreement to construct a major ...

To improve supplies, Samsung to build chip factory in Texas

SAN JOSE, California: Samsung Electronics will build a $17 billion semiconductor chip factory in Texas, in a bid to increase ...

SINGAPORE: Three months after Cambodia rolled out COVID-19 vaccines, just 11 percent of its population had received at least one ...

KABUL, Afghanistan: Under new rules imposed by the Taliban government, women have been banned from appearing on television dramas in ...

MAGWAY, Myanmar - Following an escalating conflict between the Myanmar military and the local People's Defence Force (PDF) in the ...

Health ministry has no record of people who missed second doses

KATHMANDU, Nepal - Around ten percent of residents of Kathmandu who received the first dose of AstraZeneca or Vero Cell ...