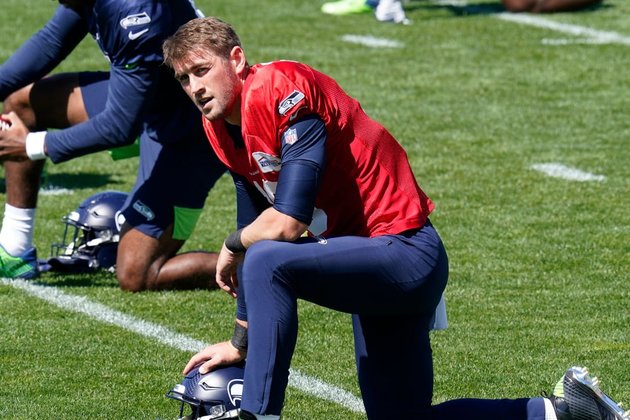 EAGAN, Minn. - The Vikings are continuing to add depth to their quarterbacks room during Week 2 of U.S. Bank Stadium Vikings Training Camp.

After Minnesota signed Case Cookus in time for him to participate in Monday's practice, the team announced it also has claimed Danny Etling off waivers. The pair of moves occurred after three quarterbacks - including starter Kirk Cousins - were added to the Reserve/COVID-19 list. Cousins, Kellen Mond and Nate Stanley all were unable to participate in Saturday night's practice at TCO Stadium or Monday's session due to NFL COVID-19 protocols. It is unclear when they will be able to return to TCO Performance Center.

Etling played for Purdue and LSU and in 2018 was drafted 219th overall by the Patriots. Having most recently spent the 2020 campaign on Seattle's practice squad, the 27-year-old has yet to throw a pass in a regular-season NFL game.

Here are five things to know about Etling:

1. From Boilermakers to the Tigers

Etling spent the 2013 and 2014 seasons playing for Purdue under former Vikings wide receivers coach Darrell Hazell. He initially was named the starter for 2014 but played in just five games.

After sitting out the 2015 season due to NCAA transfer rules, Etling started for the LSU Tigers in 2016 and 2017; he totaled 4,586 yards, 27 touchdowns and seven interceptions for a passer rating of 144.4. Etling helped the Tigers defeat the Louisville Cardinals in the Citrus Bowl to end the 2016 season.

Etling and Vikings receiver Justin Jefferson did overlap at LSU in 2017, but Jefferson only appeared in two games and did not record a catch that season.

According to a 2019 interview with Patriots.com, Etling got his start in football thanks to a wager made with his mom.

And in case you're wondering, he only played tennis until middle school.

Etling hails from Terre Haute, Indiana, where he attended Terre Haute South Vigo High School. As a senior, he threw for 1,505 yards and 11 touchdowns.

When he was in high school, Etling became an Eagle Scout, which is the highest achievement attainable in the Scouts BSA program of the Boy Scouts of America.

"It was something really cool, something no one can take away from you. My mom was heavily involved with it as well and helped push me to continue to keep pursuing it," Etling told Patriots.com. "As I started to gain more and more traction with it, I eventually got to the point where I was able to do a project at the end. I did it at the Bethany House in Terre Haute for Catholic Charities. I kind of fixed that up and was able to do that project. It was really cool."

Etling served as a Rock the Vote ambassador prior to the 2020 Presidential election, encouraging fans to form a voting plan prior to the Election Day.

WASHINGTON D.C.: The Transportation Department has announced that it will grant permission to a single low-cost or ultra-low-cost carrier to ...

NEW DELHI, India: The Competition Commission of India (CCI) has declared that Google abused the dominant position of its Android ...

World Economic Forum to return to Davos early next year

DAVOS, Switzerland: Organizers say the World Economic Forum will be again held in the mountain resort of Davos, Switzerland, from ...

WASHINGTON D.C.: A senior White House official said the Biden administration is drafting a new system for international travel, to ...

ATHENS, Greece: On Saturday, Greece announced it has opened a new migrant holding camp on the island of Samos close ...

BEIJING, China: China is carrying out emergency procedures after a 6.0-magnitude earthquake struck Sichuan Province in the country's southwest, killing ...

WASHINGTON D.C.: A senior White House advisor has said that the Biden administration is considering mandatory COVID-19 vaccinations and contact ...

CHICAGO, Illinois: The airline industry is showing signs of recovery from the COVID-19 pandemic, Boeing said on Tuesday, predicting rising ...

Indiana Jones and the Kingdom of the Crystal Skull (4K UHD)